Memorial Day brought into sharp focus the tremendous sacrifice some people (and families) make for the benefit of others.  Although many of us will never be called upon to risk everything for anyone, we all make sacrifices and compromises for the people we love on a daily basis. 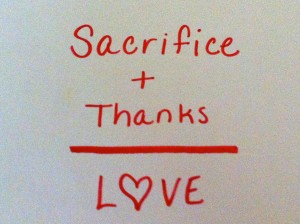 I’ve been thinking about this dynamic a lot because my new work-in-progress features a hero who is genuinely self-sacrificing.  While this quality makes him very likable, his own personal happiness takes a back seat too often.  As a result, I started to wonder about whether or not making sacrifices for love is a good or bad thing.

I did a little digging to get at the psychology behind the interplay among sacrifice, compromise, and love.  First, let’s clarify the difference between sacrifice and compromise.   Aaron Ben-Zeev, PhD, wrote an article about this very topic in which he defines a sacrifice as giving up something precious in order to gain or maintain something (e.g., giving up a career in order to stay home with kids), and a compromise as giving up the pursuit of a prospect of something better in order not to risk an existing situation.  Thus, in his words, the realm of sacrifice is an actual realm, whereas compromise is an imaginary realm.  For this reason, he argues, “The potential loss in compromise is more emotionally painful because it involves unfinished business; the person might not accept the compromise and might be constantly aware of its negative aspects. Sacrifice is less emotional as the person has willingly made it and has no further doubts concerning its value and necessity, unless the person begins to regret it.”  So, now that we understand some of the mental/emotional gymnastics engaged by any decision to compromise or sacrifice, can we do these things repeatedly and stay happy in a relationship?

Bjarne Holmes, Ph.D., has written an article discussing that very topic.  The answer?  It depends!  Apparently small daily sacrifices make a person feel more committed to their partner, even if the sacrifice doesn’t make the partner happier, unless (a) the sacrifice is having a really stressful day and is expected to make additional sacrifices, or (b) the partner rarely makes sacrifices in return.  This makes sense to me, because I do feel good about myself when I make a sacrifice for someone else unless I feel taken for granted (or am having a really crappy day).

Amie M. Gordon, M.A., has written a few articles on this topic as well.  Her “Pros and Cons” article touches upon some of the concepts in Dr. Holmes’ piece (such as reciprocation), but cushions it by claiming your partner is more likely to reciprocate when you sacrifice.  She further clarifies her point by addressing the importance of being authentic to one’s own needs, and communicating those so your partner recognizes your sacrifices and compromises.  In a separate article, she raises a number of questions you should ask yourself before making a major sacrifice, such as how committed you are to the relationship, would the partner reciprocate if in your shoes, does the partner recognize the sacrifice you are making, and is there a better solution or compromise?

Bottom line, it seems that sustaining a loving relationship does require on-going sacrifices and compromises, and while each one may not always make you feel happier in the relationship, you can’t maintain a long-lasting relationship without some degree of sacrifice.  You have to let go of the consequences in favor of valuing the love you have, be mindful of the sacrifices you ask be made for you, and look for mutually acceptable compromises!

What do you think?  Is there a balance in your own relationship, or are you making too many sacrifices, or asking for more than you are giving?  Or do you believe that you shouldn’t have to sacrifice anything for love?

Now I’ve got to go work this information into my current story!