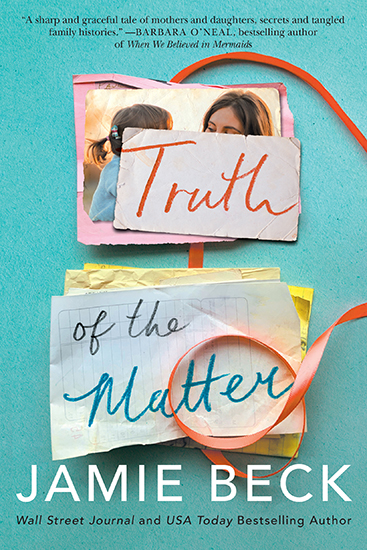 Truth of the Matter

Starting over means looking back for a mother and daughter on the road to reinventing themselves in a moving novel about family secrets and second chances by Wall Street Journal bestselling author Jamie Beck.

Seventeen years ago, two pink stripes on a pregnancy test changed Anne Sullivan’s life. She abandoned her artistic ambitions, married her college sweetheart before graduation, and—like the mother she lost in childhood—devoted herself to her family. To say she didn’t see the divorce coming is an understatement. Now, eager to distance herself from her ex and his lover, she moves with her troubled daughter, Katy, to the quaint bayside town of Potomac Point, where she spent her childhood summers.

But her fresh start stalls when the contractor renovating her grandparents’ old house discovers a vintage recipe box containing hints about her beloved grandmother’s hidden past. Despite the need to move forward, Anne is drawn into exploring the mysterious clues about the woman she’s always trusted. Gram’s dementia is making that harder, and the stakes intensify when Katy’s anxieties take an alarming turn. Amid the turmoil, uncovered secrets shatter past beliefs, forcing each woman to confront her deepest fears in order to save herself.

“Beck spins a poignant, multigenerational coming-of-age tale as these three women navigate their identities, dreams, and love lives. Complex and introspective, this is by turns heart-wrenching and infectiously hopeful.”
—Publishers Weekly, Starred Review
“A sharp and graceful tale of mothers and daughters, secrets and tangled family histories.”
—Barbara O’Neal, bestselling author of When We Believed in Mermaids 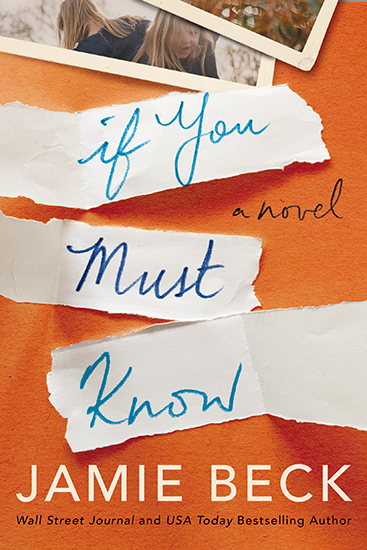 If You Must Know

Life turns upside down for two sisters in an emotional novel about how secrets and differences can break—or bind—a family.

Sisters Amanda Foster and Erin Turner have little in common except the childhood bedroom they once shared and the certainty each feels that her way of life is best. Amanda follows the rules—at the school where she works; in her community; and as a picture-perfect daughter, wife, and mother-to-be. Erin follows her heart—in love and otherwise—living a bohemian lifestyle on a shoestring budget and honoring her late father’s memory with a passion for music and her fledgling bath-products business.

The sisters are content leading separate but happy lives in their hometown of Potomac Point until everything is upended by lies that force them to confront unsettling truths about their family, themselves, and each other. For sisters as different as these two, building trust doesn’t come easily—especially with one secret still between them—but it may be the only way to save their family.

“Beck expertly captures the bickering between sisters, the pain of regret, and the thorny path to forgiveness. With well-realized secondary characters… and believable surprises peppered throughout, Beck’s emotional tale rings true.”
—Publishers Weekly

“[Beck’s] heartwarming novel explores the sisterly bond
with a touch of romance and mystery.”
—Booklist

“In perfect prose, Jamie Beck weaves a story of two sisters at odds, relationships in peril, and lives turned upside down. A testament to the strength of family—and the beauty of forgiveness—If You Must Know is a summer read with staying power and a poignant reminder that what we need most will always find its way back to us.”
—Kristy Woodson Harvey, bestselling author of Slightly South of Simple

Sign up to receive monthly newsletters with exclusive excerpts, inside scoops, and fun tips. After you sign up, you will receive a confirmation email with a link you must click to confirm your interest.

Please note the birthday info is not required, but if you provide it (and you can fake the year if you want to), you will be eligible for the birthday bunch gift box drawing!

Note: this is a private list—your email address will not be shared, and you can always easily unsubscribe at any point.

We use cookies to ensure that we give you the best experience on our website. If you continue to use this site we will assume that you are happy with it.OK