The Secret of Aging Gracefully

Getting older beats the alternative ~ Grammy circa 1970s

Okay, so my maternal Grammy didn’t actually coin that phrase (which apparently is attributed to French actor Maurice-Auguste Chevalier), but it was one of many adages she’d toss at us to make her point.  Others included: “Where there’s smoke, there’s fire,” “A bird in the hand beats two in the bush,” “Don’t cut your nose off to spite your face,” and “Don’t $%!# where you eat.”

Grammy was actually something of a marvel.  At the age of two, she lost her right hand in a train accident.  Growing up with her disability as one of seventeen kids on a Pennsylvanian farm during the depression, she learned about hard work and suffering.  The circumstances of her life left her with little patience for excuses or for petty complaints about physical imperfections.  But despite it all, her general nature was cheerful and optimistic.

As an adult, she painted, played piano (used her blunt arm to pick out the melody, her left hand for chords), raised three kids, and worked as a housekeeper and caretaker for most of her life.  She loved cigarettes, bowling, gambling, and any starch she could get her hands on (which is why she was a round as a barrel, and just as jolly as Santa Claus).  She loved her siblings, many of whom gathered daily on her back porch to listen to polka music and gossip about the nephews, nieces, and grandchildren.  And we grandchildren loved Grammy, especially when our parents left her in charge, because she didn’t care what kind of mess we made…she thought we were little, hilarious, creative geniuses.

Grammy was flighty.  She was simple.  Most importantly, she knew to be grateful for her blessings, and not to waste time yearning for what she didn’t have, or for what might have been.  She pursued her passions and prioritized her relationships with the people she loved.  That’s the wisdom she imparted to the rest of us, and why I’m thinking about her on my forty-seventh birthday.

Hard to believe I was once this little baby. 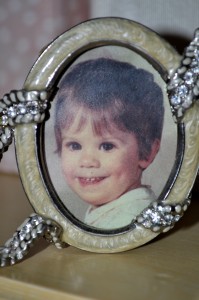 As I creep closer to the half-century mark, I think about how I wish to live the rest of my life, and how I want to be remembered when I’m gone.  I realize I want to be just like Grammy – living fully in the moment, thankful for the love and relationships in my life, and using my gifts to the best of my ability without comparing myself to others.  I think that is what aging gracefully is all about.

By the way, my own mother now has picked up where Grammy left off, but has added a new adage to the repertoire, “The older I get the smarter my mother becomes.”  I know she’s probably just trying to brainwash me into listening to her advice, but I think she’s on to something (and I’m going to start brainwashing my own daughter, too)!

What does aging gracefully mean to you?