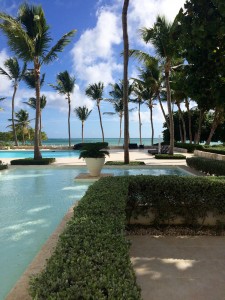 As some of you know, I just returned from a week-long vacation with six of my friends. We escaped the fall weather by traveling to the lush tropical paradise of Punta Cana, Dominican Republic. Of course, we could have been holed up in a tornado bunker in Kansas and still had a great time together, but the DR proved to be infinitely more beautiful and relaxing.

We expected white sands and clear, turquoise-colored water, palm trees and plenty of rum punch. But one thing we didn’t expect was to run into wedding receptions everywhere we went. Whether at the beach club, a restaurant in downtown Punta Cana, or brunch at the Tortuga Bay hotel, we kept crossing paths with wedding parties. We swooned a bit at the romance of it all despite the fact that the seven of us–married a combined total of 110 years–were all carousing around the island without our husbands!

But that’s beside the point. 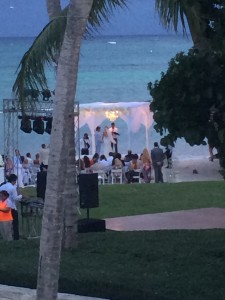 Seeing these weddings prompted a conversation about destination versus hometown weddings. Some of my friends were firmly in favor of local weddings. They preferred to invite large groups of friends and family and spare guests the costs associated with traveling too far. Some were willing to make an exception to the hometown wedding provided the destination held special meaning to the couple (they met there or got engaged there, or something like that).

Having planned my own wedding in Italy and attended several other destination weddings (Florida, Aruba, Vermont), I argued in favor of the intimate yet exotic destination wedding. Personally, I preferred a small affair over hundreds of guests, half of whom–like parents’ colleagues and distant relatives–I probably wouldn’t have known. And as a guest, I’ve always turned a destination wedding invitation into a mini-vacation, so that made the extra cost worthwhile.

But in the end, the most important element of any wedding has nothing to do with its location. It doesn’t even have to do with the guests, the dress, the cake, or the music. All that truly matters is that the bride and groom come together and make a commitment to love and honor each other until the end of their days. That HEA is not just for romance novels, after all.

Where was the last wedding you attended?