Want to Fall In Lust With A Bad Boy?

Last week’s reading recommendation (Me Before You) discussed a thought-provoking and heartbreaking love story.  This week I’m changing gears and offering something light and fun.

I’ll admit to enjoying historical romance novels.  Who can resist dashing dukes, rakish viscounts, and secret trysts?  One of my favorite historical romance authors is Lisa Kleypas (who also writes contemporary romance novels, including contemporaries with ‘mystical’ elements).  If you don’t know her work, I envy you because you get to discover her wonderful characters and writing.

With so many of her books to choose from, it was difficult to pick one.  I considered her heroes and opted to highlight one of my favorites, Sebastian, Lord St. Vincent.  He is featured in The Devil in Winter, one of the four Wallflowers series stories (book three of a four book series), originally published in 2006. 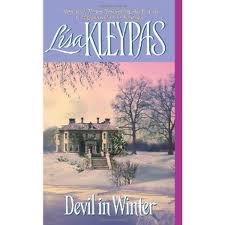 The book blurb on Amazon reads:

Easily the shyest Wallflower, Evangeline Jenner stands to become the wealthiest, once her inheritance comes due. Because she must first escape the clutches of her unscrupulous relatives, Evie has approached the rake Viscount St. Vincent with a most outrageous proposition: marriage!

Sebastian’s reputation is so dangerous that thirty seconds alone with him will ruin any maiden’s good name. Still, this bewitching chit appeared, unchaperoned, on his doorstep to offer her hand. Certainly an aristocrat with a fine eye for beauty could do far worse.

But Evie’s proposal comes with a condition: no lovemaking after their wedding night. She will never become just another of the dashing libertine’s callously discarded broken hearts — which means Sebastian will simply have to work harder at his seductions…or perhaps surrender his own heart for the very first time in the name of true love.

Be warned, Sebastian is not an admirable hero.  He’s practically amoral (and proud of it).  And he’s broke, which is why he accepts Evie’s proposal.  So why do I like him so much?  Well, aside from my sick obsession with twisted, damaged heroes, Sebastian has a great dry wit.  And despite his arrogant, gruff persona, his tenderness is revealed soon enough.  I promise you’ll find yourself cheering him on by the end of the book.  What about the heroine?  Evie’s shyness and stutter make her appear weak to the world, but she has a spine of steel.

To demonstrate the banter throughout the book, here’s an excerpt from the end of the first chapter, once Sebastian agrees to Evie’s proposal  (and she’s eager to rush off to Gretna Green to marry before her relatives find her).  Note that, a week prior, Sebastian had kidnapped Evie’s friend in a failed forced elopement plot.  In this excerpt, Sebastian is the first to speak:

“I’ll have the carriage readied and have the valet pack my clothes.  We’ll leave within the hour.  Incidentally, if you decide to back out of our agreement at any time during our journey, I will strangle you.”

She shot him a sardonic glance.  “You w-wouldn’t be so nervous about that if you hadn’t tried this with an unwilling victim l-last week.”

“Touche. Then we may describe you as a willing victim?”

“An eager one,” Evangeline said shortly, looking as though she wanted to be off at once.

“My favorite kind,” he remarked, and bowed politely before he strode from the library.

Bottom line, if you want to escape into a different era and world, and see the good girl reform the bad boy, then read this book.  It won’t disappoint!