If you have only one smile in you, give it to the people you love. Don’t be surly at home, then go out in the street and start grinning ‘Good morning’ at total strangers. – Maya Angelou

This concept is something we discuss often in my house.  Most times, I’m lecturing my daughter about the critical or impatient tone she sometimes takes with her younger brother when he is seeking her company or approval.  She’s not intentionally cruel, but she’s not very sensitive either.  I’ve asked her, in those instances, to imagine if it were her friend asking or doing the very same thing, and then picture how she might respond to the friend.  At least she admits she would handle things differently (more kindly)…which gives me hope. 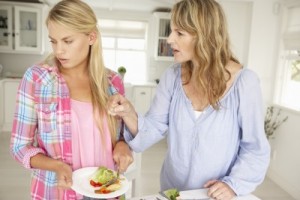 But, as much as I’m bothered by her occasional callousness at home, I can’t pretend I, too, don’t often snap at my husband or children in a way I would never speak to a friend or acquaintance.  Worse, when I see other people verbally mistreat their kids or spouse, I cringe.  Not because I’m judging them, but because I know I’ve done the same thing.  When I’m an observer, it’s so easy to see the ugliness of such conduct, as well as the vitriolic reaction’s negative impact on the recipient.

Years ago I read a child psychology book that discussed this very thing (unfortunately I can’t recall the title or author).  It used the example of a child leaving the house without an umbrella on a rainy day, and a parent chasing after them saying something along the lines of, “What’s the matter with you?  Can’t you see it’s going to rain?  Jeez, use your head more often.”  It then suggested how said parent would handle the situation if his or her friend had left an umbrella behind, suggesting the parent might chase the friend down but merely say, “Oops, I think you’ll be needing this today!”  Same result (chasing them down to give them what they need); totally different emotional impact.

I notice I’m the worst offender of familial niceties when I am stressed out about whatever I’m juggling in my own life.   There are days when I get so behind on my to-do list, I think I might explode in frustration…and then something more happens and I do!  I assume my husband and kids know I love them (based on all I do for them each week) and, therefore, assume they’ll “put it in perspective” and forgive me.  But that’s not fair, is it?  Worse, this stuff adds up over time and, even if they do forgive me, is my unattractive behavior the lasting impression I want them to have of me?  Absolutely not.

So, my Summer 2013 Resolution is to treat my family at least as courteously as I treat my friends.  Hopefully this doesn’t mean I will now force my friends to suffer my wrath.  Maybe I should invest in a punching bag?

How about you?  Do you treat your friends better than your family?  Or, do you have tips to help a gal out?