Reading Recommendation: Under the Wide and Starry Sky

I received a free copy of this book via NetGalley in exchange for an honest review.  This review contains some spoilers.

Under The Wide and Starry Sky, by Nancy Horan, is available for pre-order on Amazon. 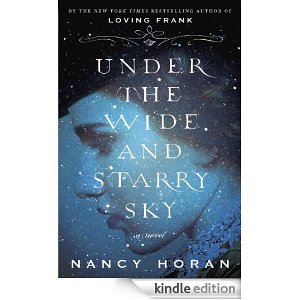 The book summary on Amazon reads:

At the age of thirty-five, Fanny Van de Grift Osbourne has left her philandering husband in San Francisco to set sail for Belgium—with her three children and nanny in tow—to study art. It is a chance for this adventurous woman to start over, to make a better life for all of them, and to pursue her own desires.  Not long after her arrival, however, tragedy strikes, and Fanny and her children repair to a quiet artists’ colony in France where she can recuperate. Emerging from a deep sorrow, she meets a lively Scot, Robert Louis Stevenson, ten years her junior, who falls instantly in love with the earthy, independent, and opinionated “belle Americaine.”

Fanny does not immediately take to the slender young lawyer who longs to devote his life to writing—and who would eventually pen such classics as Treasure Island and The Strange Case of Dr. Jekyll and Mr. Hyde. In time, though, she succumbs to Stevenson’s charms, and the two begin a fierce love affair—marked by intense joy and harrowing darkness—that spans the decades and the globe. The shared life of these two strong-willed individuals unfolds into an adventure as impassioned and unpredictable as any of Stevenson’s own unforgettable tales.

The story opens in Fanny’s point of view, and she initially comes across as an empathetic, modern-thinking, independent woman.  I was invested in her struggles and her goals for the first half of the book.  When she finally meets Robert, he is instantly smitten with her (as I was with him).  Once she finally warms to him, then begins their May/December romance, which spans twenty years and several continents, family dramas, divorce, and much illness.

For me, the story soon became overwhelmingly depressing.  Fanny and Robert’s lives are filled with much turmoil, and there was little to lighten the read.  I acknowledge, however, others may find their triumphs to be inspirational.  Part of my less-than-enthusiastic response to their story has to do with the fact that, as it went on, I increasingly found Fanny to be vain, self-centered, and a bit too invested in playing the martyr at times.  She seemed jealous of his friends, his success, and even her own daughter.  I would’ve totally lost interest in the love story were it not for the portrayal of Robert, who was quite a romantic (not only in his relationship with Fanny, but also in his relationships with his friends and the world at large).  I rooted for him to prevail at every turn, and felt invested in his happiness, if not hers.

Because the book covers so much ground, some events were glossed over when the book skipped ahead a year or more.  At times, this robbed the story of emotion, although I can’t offer a better suggestion for how the author could have condensed the story.

Essentially, if you love historical fiction and/or Robert Louis Stevenson, you will enjoy this peek into his life.  Ms. Horan’s meticulous research and creative talent help bring the exotic elements of the story to life.  I’m glad I got to see this intimate side of Mr. Stevenson, and applaud Ms. Horan on an undertaking of such proportion.

PS  What are you guys reading?