This may get me in trouble, but I’m going to explore it anyway.  And no, it has absolutely nothing to do with romance…but perhaps it has something to do with love.  Self love.

Today is Ash Wednesday, the beginning of forty-days of fasting, spiritual discipline, and repentance for Christians around the globe.

I’m not the best practicing-Catholic.  In fact, I’m pretty poor.  I pray privately.  I repent privately.  I think about God (doubts and substantiations).  But I don’t follow all the “rules” of my faith or study the Bible 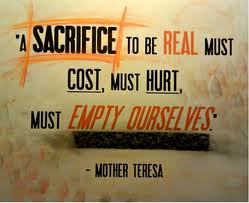 .  I don’t regularly attend Mass.  I criticize many of the decisions made by those in charge, most especially as relates to the scandals involving priests and young children.  Yet, despite my reservations and distant relationship with formalized religion, I have usually sacrificed something during Lent.

I’m a fairly big proponent of self-sacrifice.  I like to think I know how to put the needs of others ahead of my own at least half the time.  I hope my friends and family know and appreciate this about me.  And although nine out of ten times I’d happily make the same sacrifice again, there are occasions when it feels like a burden.  When it feels wrong.

I recently read this quote by controversial author Ayn Rand:

It only stands to reason that where there’s sacrifice, there’s someone collecting the sacrificial offerings.  Where there’s service, there is someone being served.  The man who speaks to you of sacrifice is speaking of slaves and masters, and intends to be the master.

That bald statement made me sit back and think about when it is or isn’t appropriate to sacrifice on behalf of another.  When I contemplate the times my sacrifice felt burdensome, it has always been when I’ve felt the scales were uneven.  When I deemed myself to give much more than I took from a relationship.  When guilt or other form of coercion was employed to secure my cooperation.  When the sacrifice was not appreciated, but expected.

So, as I enter this particular season of Lent, I think I am not going to make a sacrifice just because the Church says I should.  I don’t necessarily agree with Mother Theresa’s quote about real sacrifice requiring us to empty ourselves.  I believe a loving God is most interested in having us simply appreciate the gift of life and make the most of whatever talents we’ve been bestowed.  To live by the Golden Rule should basically be enough.

Yes.  Perhaps God doesn’t need us to prove our love with a sacrifice (does he really care if I don’t eat chocolate?) any more than we need our children to prove their love for us by giving up something they enjoy.

What do you think?