So far I’ve recommended one heart-wrenching love story and one historical romance.  Let’s switch gears to something contemporary and heartwarming!  Boomerang Bride, by Fiona Lowe, won the 2012 RITA for best Contemporary Single Title Romance (RITAs are the Romance Writers of America’s most prestigious awards).

Matilda Geoffrey risked it all for love. She left Australia to be with Barry—the man who had swept her off her virtual feet. Now, wearing a wedding dress, she’s alone on Main Street in small-town Wisconsin, and things aren’t working out exactly as planned… 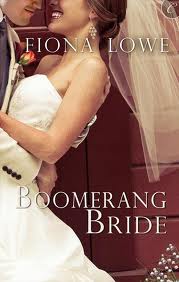 In town for his annual family visit, Marc Olsen had never seen a bride quite like Matilda—staring into a storefront window, holding a tottering wedding cake, and looking desperately in need of a groom. He may not have any warm feelings for his hometown, but meeting Matilda just as she discovers she’s been scammed by her online “fiancé” stirs something in him.

Matilda is not the kind of woman Marc imagined himself with, and Marc is anything but the romantic hero that Matilda has always dreamed of. But as unlikely circumstances throw them together, can they let go of their misconceptions and risk their hearts for love?

I’ll admit I wasn’t a fan of the ‘hook.’  Big city architect visiting his small hometown runs into broke, jilted, alien bride wearing her gown.  Groan, right?  In fact, I also found both Marc and Tildy slightly annoying during the opening pages.

But I’m glad I stuck it out because Tildy is now one of my favorite contemporary romance heroines.  She’s plucky, forthright, emotionally tender, and kind.  Moreover, she’s not given to self-pity or desperation despite everything she’s experienced.  And Tildy isn’t the only character with realistic, admirable, and richly layered traits.  All of the characters are fully developed, as are their relationships to one another.

Marc and Tildy’s romance begins after she takes a few temporary jobs, including being a live-in caretaker for his sister, Lori (a cancer patient), and her son.   As the story proceeds, Tildy becomes a friend to Lori and her son, a lover to Marc, and an integral part of the community.  Marc’s emotional growth is slow, but believable, as he struggles with his conflicting feelings about his hometown roots and his growing attraction to Tildy.  In the end, I felt very convinced of Marc and Tildy’s love for each other, as well as the secondary love story between Marc’s sister and her love interest.

This wholesome tale (which does contain explicit sex scenes) offers a refreshing change of pace from the glut of erotica and highly sexualized romances available today.  It’s a great book for someone looking for a quick read with a very satisfying ending.