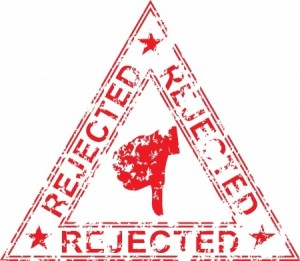 It’s humbling.  It’s hard to remain motivated and not feel inferior to other writers.  It’s really hard not to take it personally.  But, as difficult as it is, I know it’s a critical part of this journey.  That’s right – that bitter pill of rejection is actually a positive because the critical feedback exposes my weaknesses, which enables me to work on fixing them.  Thus, rejection is actually making me a better writer.

Consequently, it’s imperative I learn to separate my ego from the process.  To recognize rejection is based on many factors (is the manuscript well written, is it good but lacking a clearly defined market, does it appeal to a particular editor’s taste, and so on).  Rejection is not simply a big rubberstamp proclaiming, “You’re Not Good Enough.”  And once I digest that truth, it becomes a little easier to accept.  It becomes easier to use it to improve rather than use it as an excuse to give up.

This same philosophy can be applied to any kind of criticism or rejection one receives throughout his or her life, whether through a lay-off, a break-up, or dispute with a friend.  It’s human nature to feel defensive, hurt, or even bitter when we meet with criticism.  But we shouldn’t let it crush our spirit or make us feel inferior and unworthy.  Most criticism is given constructively (whether by a parent, friend, boss, or partner).  When it isn’t constructive – when it’s intended to injure – then you must put it in perspective and let it roll off your back.  But never let it create such self-doubt that you wither up and refuse to try new things or meet new challenges.  Never let it make you feel less than.

We all have value.  We all bring something unique and beautiful to the table.  Sometimes there may be a better way to do something; other times there is simply a different way.  Listen to the feedback, determine whether it can help you or not, act on your decision, and then move on.

How do you handle criticism or rejection, and what advice would you offer to others?