Our neighbor’s cat, Stitch, was a fixture on our street for a dozen years. He’s been in everyone’s home from time to time–sometimes invited, other times not. As he aged, he became rather bold, lying in the middle of the road or driveway and refusing to budge for cars. Love him or not, no one would deny that he was a bit of an old soul and a vagabond (often being spotted a mile or farther away from our street).

My husband adored this cat. Several times per week he’d sit on the front or back porch with Stitch, feeding him milk and tuna. He’d purr at that furry friend while petting him. In truth, he and my kids considered Stitch “our” cat, and based on the number of hours he spent with us, maybe they weren’t wrong. 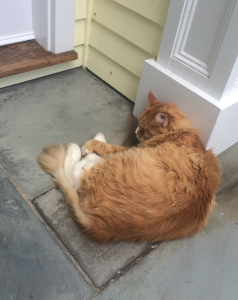 On the other hand, I’m allergic to cats. I could also get easily annoyed by Stitch barging into my house or racing to the grill and standing at my feet whenever I cooked. I’d have to watch for him in the driveway and physically move him so I could come or go. He’d chase me into the garage, too, which would make me grumble when trying to carry the groceries inside the house without letting him slip past me.

Although he could be a nuisance, when I noticed how slow he’d been growing–how hard of a time he had getting up and down–I worried about how my family would deal with his inevitable death. In order to preserve his memory, I wrote him into my upcoming release, BEFORE I KNEW. When I made that choice, I didn’t know how or when the end would come, just that it would come. 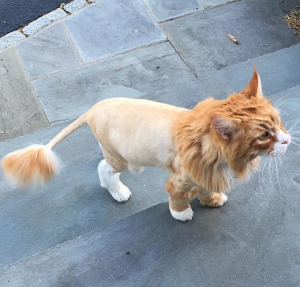 Well, it came today. I wish I could say it was peaceful and that his owners informed the  neighborhood. Sadly, I discovered him in our yard this morning, clearly the victim of a coyote attack. It was heartbreaking, to say the least, which surprised me because I had not loved him like my family had.

But tonight when I go to the grill, I know I’ll feel his absence. Even now, writing this simple post, my eyes are a little dewy. My husband was right all along: Stitch was a cool cat. I now wish I’d appreciated that more before it was too late. This isn’t the first time I’ve been slow to realize something like that, but I hope it’s the last.

It’s a good reminder for me to be more present and to appreciate all the little things that are part of my journey. And when we all face the sad reality that nothing lasts forever, perhaps we should emulate Winnie the Pooh’s attitude and think to ourselves: “How lucky I am to have something that makes saying goodbye so hard.”