By most standards, 2016 has been a turbulent, surprising, somewhat devastating year.

We’ve lived through the ugliest political campaign I’ve witnessed in my lifetime, and sadly we’re still seeing a rise in populist sentiment (eg., Brexit and other elections across Europe). Cop killers and killings have sparked protests and resentment nationwide. Nearly 91 people per day are dying of opiod overdoses in the U.S. (according to the CDC). Zika is spreading (not only through mosquitoes, but also through sexual contact), and no one knows how long that virus will last in one’s system or how devastating the ultimate consequences will be. On the somewhat lighter side of bad news, Brangelina split! And Kim Kardashian lost millions in a weird jewelry heist.

Scary, sad times, most say. But as we head into 2017, let’s remember some of the positive things that occurred in 2016. 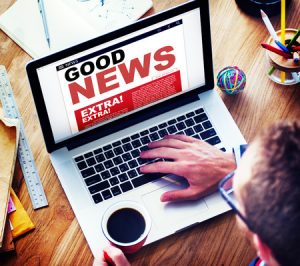 Need examples? Well, the economy has improved. Stock markets have hit new highs, and unemployment is at its lowest rate in nine years. Harriet Tubman will be on new $20 bills. The Cubs won the World Series for the first time in more than a century. And U.S. carbon emissions are at the lowest levels since 1991. Those are just a few examples of good news that seems to get buried beneath the bad.

It’s so very easy to get caught up in negativity when it’s trumpeted on every major media outlet, and on social media. People love to be heard, and for some reason, most like to spread doom and gloom.

If we want a better world, maybe the place to start is with a resolution to look for, share, and celebrate good news (big and small)! If we collectively contribute positive messages and share “feel good” stories and wins, maybe a groundswell of goodwill will slowly erode fear and hate and lay the foundation for change for the better.