I doubt I’m alone in feeling a great deal of trepidation as we look forward to tomorrow’s election. At fifty, I can’t recall another instance in my lifetime where I’ve seen such contention and divisiveness between candidates and their supporters.

Facebook is no longer a fun space because people bully and belittle each other. No surprise, I suppose, because the candidates trash the other’s supporters, too. Media consultants speak over each other and trade put-downs. In truth, no one has really shown anyone with a different opinion any respect. In that way, everyone has been “deplorable.” 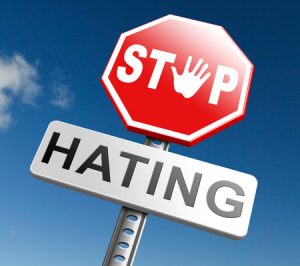 The funny thing is that, the great majority of us are probably in the same boat: neither candidate represents our agenda or interests. Maybe you’re a moderate Republican (like me), who believes in small government, lower taxes, but also supports gay rights, is pro-choice, and wants tighter gun control. Or maybe you’re a moderate Democrat, who thinks taxes should go up for some, but spending should be cut, too. I don’t know, and it doesn’t matter, because we are each entitled to our opinions (and hopefully those opinions are based on something more than mere media soundbites).

What we aren’t entitled to is being so hateful toward each other. First of all, it’s just rude. Why does anyone think its okay to demean another person’s opinion or vote? Does a person who disparages another person actually feel better about himself? Picking on someone else as being “stupid” for his or her differing opinion does not persuade anyone that your opinion is correct, does it? It just makes you a bully. Don’t be a bully. Don’t make people feel stupid just because they like something about a candidate that you don’t like or understand.

Secondly, this belittling is dangerous and bad for the country. We are 300 million people and growing. There will never be a time when we are 100% unified on any topic, but we still have to live with and work together. We have to try to find the middle ground so progress can happen. To find middle ground, we have to be able to actually listen to and understand that other side’s grievances. The failure of the parties to work together this past decade has led us to this terrible place (in my opinion). I hope this election is a wake-up call to BOTH sides of the aisle. We need leadership to step toward each other or this democracy will collapse.

Our forefathers gave us power but, by and large, the vast majority (myself included) doesn’t exercise it enough. The bottom line is that, if we the people are unhappy with our choices, it is because most of us have failed to stay informed and involved all along. It is not fair to spew hate and anger if we’ve never read a paper, called a representative, or otherwise participated in the process on a more regular basis.

My biggest wish for tomorrow is that—no matter who wins, or how disappointed we may be—we take a deep breath, we get more involved in politics by staying informed, writing to our representatives, and taking advantage of the right to be proactive in the process, and we refrain from making ugly statements about the winner and his or her supporters.

In other words, it starts with your vote, but it doesn’t end there.