Book Review: The Opposite of Maybe

I received a free advanced copy of this book from Netgalley in exchange for an honest review.

The Opposite of Maybe, by Maddie Dawson, will hit the shelves in early April.  I read this romantic women’s fiction novel a few weeks ago, but needed time to consider how I would rate and review this story.

By way of plot summary, this is the blurb posted on Amazon: 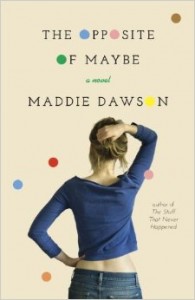 Jonathan and Rosie have been together so long they finish each other’s sentences—so when he (finally) proposes and asks her to move across the country with him, everyone is happily surprised.

But when things suddenly unravel, Rosie sends Jonathan packing and moves back home with Soapie, the irascible, opinionated grandmother who raised her. Now she has to figure out how to fire Soapie’s very unsuitable caregiver, a gardener named Tony who lets her drink martinis, smoke, and cheat at Scrabble.

It’s meant to be a temporary break, of course—until Rosie realizes she’s accidentally pregnant at 44, completely unequipped for motherhood, and worse, may be falling in love with Tony, whose life is even more muddled than hers. When Soapie reveals a long-hidden secret, Rosie wonders if she has to let go of her fears, and trust that the big-hearted, messy life that awaits her just may be the one she was meant to live.

I stayed up very late to finish this book in one sitting.  Yes, the writing voice is that strong, and certain elements of the story worked very well for me.  I thoroughly enjoyed the relationship between Soapie and Rosie.  As protagonists go, I could respect a lot about Rosie at the outset: a mid-forties woman struggling to make sense of the choices she’s made, and making the best of a situation that is something less than ideal.

Initially, I couldn’t wait for her to get distance from her longtime lover, Jonathan.  He was peculiar and totally self-centered.  And, in contrast to Tony, a loveable, down to earth man, Jonathan certainly wouldn’t be any sane woman’s final choice.

However, I began having serious problems with the way Rosie handled Jonathan and Tony as the story progressed.  By the second half of the book, I had lost a lot of respect for Rosie.  Despite Jonathan’s inability to give her the love and support she needed, he was trying, to the best of his abilities, to make the relationship work, to be a father despite never wanting to be one, and to put their relationship back together.

Meanwhile, Rosie was flirting with and falling for Tony (totally leading him on) while still preparing to move to California to be with Jonathan and raise their child.  She wasn’t being honest with herself or either man.  Honestly, by the end of the book, I felt she should have been ended up alone because of her weak way of dealing with men and life.  Had she been twenty-two and pregnant, I could have forgiven her choices more.  But forty-four?  No.  Her thoughts and fears were much too immature and cowardly for a forty-four year old woman.  Yes, I know she had a sad childhood (tragic loss of her mother, raised by a difficult grandparent) and it left her with low self-esteem.  But those problems didn’t give her a free pass (in my opinion).

I think the author was hoping to make Rosie seem heroic, like a martyr who was willing to go back to the bio-dad for the sake of the child.  But all I saw was a completely insecure, self-absorbed woman who couldn’t make a decision to save her life.  Whether dealing with the big reveal of the truth about her mom, her dilemma with Jonathan, getting over the shock and fear of pregnancy and learning to embrace it, and coming to terms with her feelings for Tony, her attitude often seemed that of an unappealing, helpless victim.

Similarly, sometimes Tony came across as a bit of a doormat (when it came to his ex-wife and their child).  That detracted from him a bit, but he was a great guy and interesting character otherwise.

So, my problem with rating this book is that while I strongly disliked aspects of Rosie and her story, I loved the writing, tension, pacing and secondary characters.

If forced to grade this book, I’d have to give it a B/B+ because the author clearly has talent and, due to the subjectivity of any review, I suspect many other people might not be as turned off by Rosie as I was.  In any case, I would definitely read another book by this author.