Sunday song time!  Today I’m bucking my tradition of focusing on the quality of a song’s lyrics in favor of letting loose with a totally addictive, dance-worthy, summer song: Blurred Lines, by Robin Thicke (featuring T.I. and Pharrell).   For those who don’t know Robin Thicke, he’s actually the son of actor Alan Thicke (anyone else old enough to remember Growing Pains?). 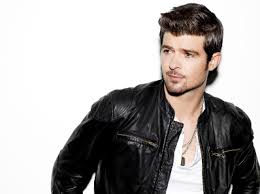 But let’s stick to the music.  Robin Thicke has written songs for a lot of other, more popular singers.  He’s had moderate success with his own song Lost Without U, but this is his first really BIG hit.  You’ll note it already has 40 million Youtube views, and if you listen to pop radio, you’ve heard it by now.

I’m not sure if it’s the 80s-era Michael Jackson vibe of the song’s opening, the background “hey hey hey’s,” or just the upbeat tempo and party sound, but this song will get you up out of the chair and put a smile on your face.  If it doesn’t, well, I just don’t know what’s wrong with you!?!

I’m not dissecting or analyzing the lyrics today because they aren’t remarkable (except maybe for their silliness).  But in this case, I’ll forgo my lyric snobbery and still love this tune.  That said, this video is not very interesting to watch (in fact, it’s a bit cheesy), but I guess it goes along with the general playful, flirty nature of the music.

Did you get up and shake your booty?  If you pull up next to a black SUV blaring this song, wave… ’cause it might be me behind the wheel!