Happy April Fool’s Day! I’m not much of a prankster these days, but when I was younger, my stepfather and I used to try to sneak up and surprise the other. I’ll admit, he won the best “scare” attack of our ongoing battle. 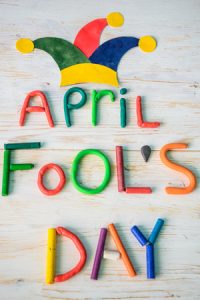 One school night in the early-mid 80s, my mom and he went to bed about thirty minutes before I did. When I finally got sleepy, I climbed the stairs–arms loaded with school books–without turning on the lights, as was my custom. On the left side of the top of the stairs was a set of double doors that opened to a hallway that led to two bedrooms (including mine, which sat at the far end of that hall). The right wall of that hall had a built-in set of drawers with a marble top for folding things, which unit was flanked by two sizable closets. That particular night, unbeknownst to me, my rather large and clumsy stepfather had crawled up onto that slab and huddled in a ball–hidden by the closet walls–and was quietly waiting for me to appear. If you could see that space and know his size, that feat alone is remarkable. When he heard me come through the double doors and start down the hall, he screamed and flailed his arms about, nearly toppling off his perch. My books flew into the air and I fell to the floor, heart pounding, flopping like a fish on dry land, spitting out the words, “That. Was. The. Best. Scare. Ever!” My mother came rushing through the house, yelling at him for giving me a heart attack. He was laughing so hard, he was bent over, unable to breath. Good times, I tell ‘ya.

Yes, we were a bit twisted, and I probably wouldn’t enjoy that kind of scare today nearly as much as I did back then. But I still smile when I remember that prank.

He died almost fourteen years ago, and I haven’t engaged in any kind of real prank in at least a decade. My kids are teens now, so maybe it’s time I did. It’s not child abuse to torment your kids a little, is it?

To prepare, I did a little web browsing, hoping to poach a clever idea from people with more practice. Some good pranks I discovered include: putting tape over the sensor at the bottom of a mouse or the TV remote, making caramel covered onions and watching that first bite, turning someone’s clock ahead by an hour while they are asleep, putting a donut box with veggie snacks on the table, and texting someone “What’s your ETA?” when you have no plans.

While cute and not too time consuming, none of those ideas strikes the right chord for me and my family. I’m hoping you might have a suggestion. Make it quick, ’cause I’m running out of time!